The Brown Dog Data Transformation Service (DTS) is a highly extensible/distributed service providing a uniform means of managing and accessing transformation capabilities within the web. Utilized tools can come in the form of command line applications, GUI driven applications, libraries, and/or other services. Here we go over the process of preparing a new transformation tool, either an extractor or a converter, for usage with the DTS.

Using the BD Development Base

BD-base runs the necessary dockerized Brown Dog Data Transformation Service components (Clowder, Polyglot, Fence, RabbitMQ, MongoDB, Redis, an example extractor, an example converter, and the BD CLI) allowing a developer to get up and running more quickly as they create and debug new extractors/converters. You can get the BD-base by cloning the git repo:

or download the VirtualBox VM image and run it:

After downloading BD-base, users can simply run the bash script in the command-line to start up the BD development base.

The BD-base script will split your terminal into panes and start each of the services needed for the Brown Dog DTS. This provides a useful and convenient way to view the logs of running services in panes.

Here we describe the process for taking a working piece of code and deploying it as a Brown Dog extractor. For simplicity, it is assumed that the method can be invoked from a single call. In this example, we are using the python extractor wrapper and will invoke a python function. In a very similar fashion, a method developed in a language other than python can be invoked using subprocess.

A few assumptions are that you have a tool that extracts some kind of metadata from a file or dataset and that you have installed Python, Git, and Docker as well other specific software needed by your extractor (if any) on your computer.

Install pyClowder2, which is a Python library that helps to easily communicate with Clowder - the backend service of Brown Dog which handles extractions. The advantage of using this library is that it manages all communications with Clowder and RabbitMQ (the distributed messaging bus) and the developer doesn't have to take care of such tasks. Needless to say, an extractor can also be written in native Python without the use of pyClowder2, but it could be more

2. Get Your Code Together

We have developed a template extractor written in Python. It is a simple word count extractor that counts lines, words, and characters in a text file. Clone the template extractor and rename the directory to an appropriate name that reflects the purpose of your extractor.

Make changes to extractors.py (main program). Consider the process_file method as the main method of an extractor and accordingly it needs to contain the main logic. You can call other methods in your python code from this method after importing necessary modules into this file.

This file contains metadata about the extractor in JSON-LD format. Update all relevant fields as needed.

Extractors obtain the configuration details required for connecting to various BrownDog components like RabbitMQ, Clowder, etc., either from command-line arguments or environment variables. If you look at the Dockerfile inside the termplate extractor directory, you can see some of the envinronment variables being set. For the purpose of running your extractor using BD Development Base, you DO NOT have to change anything.

Note: The remaining part of this section (Configuration Parameters) is relevant ONLY if you want to run your extractor against another production instance of BrownDog deployed at your end or some other location. Otherwise, you can skip and continue reading the next section (Edit the Dockerfile)

If you are planning to run your extractor using Docker, you will need to modify the Dockerfile to set the environment variables as required.

If you are planning to run your extractor as a standalone program (outside of Docker), you will need to set the command-line arguements as required. You can find the available options by running your extractor with the help option (-h, --help). 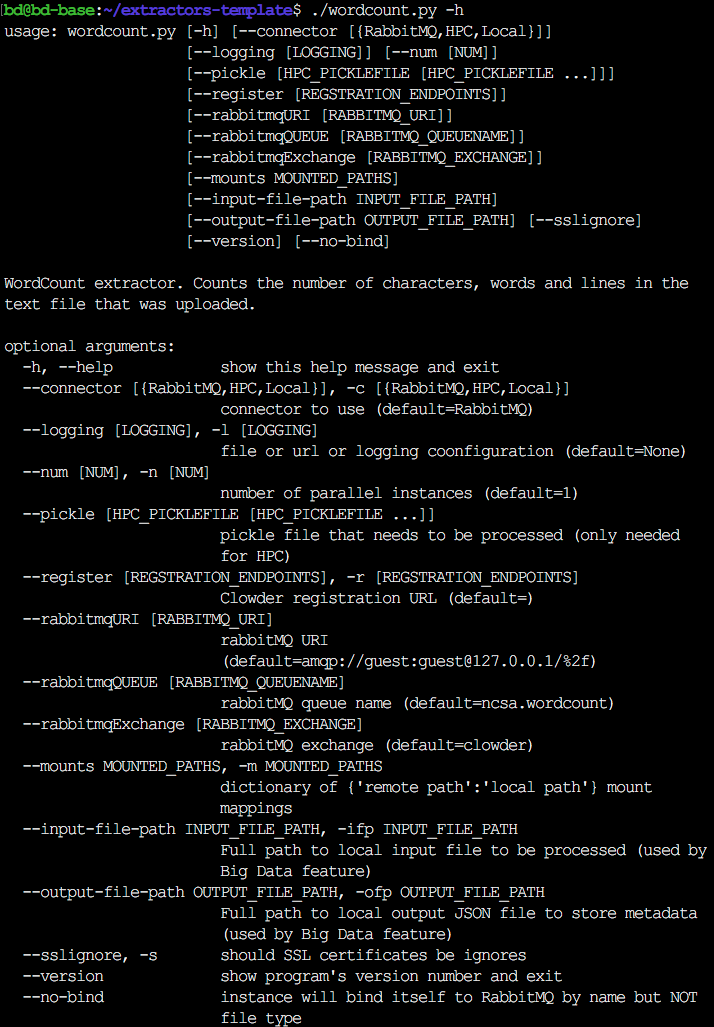 Update the Dockerfile to install your software dependencies, provide necessary instructions in Dockerfile using the RUN command. You will need to add a line in Dockerfile to switch to the root user (USER root) for getting proper permissions. For e.g., to install ImageMagick package using apt-get, add the following commands to Dockerfile:

You can test your extractor as follows:

You should see the following in the terminal. This means that the extractor is running and waiting for messages:

Here we described the process for taking a working piece of code (an application, library, other service, etc) and deploying it as a Brown Dog converter.  In this example, we describe the creation of a converter using the popular image converter tool, ImageMagick.

1. Get Your Code Together

We have developed a template converter. It is a simple image converter that converts between different image formats using ImageMagick tool. Clone the template converter and rename the directory to an appropriate name that reflects the purpose of your converter

Rename and edit ImageMagick_convert.sh script to wrap your conversion tool. This script file should be named in the format <alias>_convert.<script_type>. Here <alias> needs to be replaced by the name of the conversion tool with which the converter registers with Polyglot and <script_type> needs to be replaced by the extension for the type of script this wrapper is written in. Polyglot currently supports scripts written in Python, Bash, R, AutoHotKey, AutoIT, and Sikuli (e.g. *.py, *.sh, etc.). For the sake of ease of explanation, we will rename the script file as MyTool_convert.sh. This script accepts three parameters:

This script will be used by the Software Server to run the tool and carry out any requested conversions. The example script ImageMagick_convert.sh that uses ImageMagick tool to convert images between different formats is shown below. The conversion script follows a specific header and is written as comments:

Modify the Dockerfile in the converter directory to replace ImageMagick with MyTool. Specifically change line numbers 11, 15, 16 and 17. You need to also change other fields like maintainer and may need to add instructions to install any specific software required by your converter. For example, you can see instruction to install ImageMagick software in the example Dockerfile:

You can test your converter as follows:

You should see the following in the terminal. This means that the converter is running and waiting for messages: