The SVA1 GOLD catalog consists of basic astrometry, photometry, and object classification for 25,227,559 objects. This catalog was assembled from the SVA1 GOLD data set processed with an early version of the DES Data Management (DESDM) system, which included image detrending, astrometric registration, global calibration, and image coaddition. The SExtractor toolkit was used to create object catalogs from coadded SV images (Bertin & Arnouts 1996). The SVA1 GOLD catalog has a relative astrometric precision of ~100 mas per coordinated (from multiple DES observations of the same object) and an absolute astrometric precision of ~200 mas per coordinate compared against the UCAC-4 catalog (Zacharias et al. 2013). Object photometry is provided in the DES g, r, i, and z bands (no Y-band).

Photometric calibration was performed in two stages. First, absolute calibrations were performed against a set of photometric standards using a global calibrations module (GCM; Tucker et al. 2007). After the global calibration, a re-calibration was performed via stellar locus regression (SLR) using the BigMACs code (Kelly et al. 2014). The SLR zeropoint adjustment used the PSF magnitudes measured for objects classified as stars (more on this later). Note that the SLR adjustment produces magnitudes that are calibrated to the top of the Galaxy (i.e., corrections for Galactic extinction are already incorporated into the calibration). The calibration uncertainty of the SVA1 GOLD catalog is estimated to be < 2%. All magnitudes are put on a "picomaggie" system (DES AB magnitudes, zeropoint = 30.0).

Individual DECam exposures were coadded to increase survey depth. During the SV coaddition process, the point spread functions (PSFs) of the individual single-epoch images were not homogenized at the coadd image level. Rather, a parametric model was used to account for spatial variations in the PSF in each coadd image (PSFEx; Bertin 2011); however, this model is not a full description of the spatial variation of the PSF within a coadd image, and as a result there are systematic differences between the MAG_PSF measurements and the MAG_AUTO measurements of stars. We therefore STRONGLY RECOMMEND the use of the MAG_AUTO quantities unless detailed study motivates the use of MAG_PSF. The MAG_PSF variables were used to derive the stellar locus correction to the photometric calibration and are included for completeness.

The SVA1 GOLD data products cover ~ 250 square degrees with non-uniform depth and data quality. The non-uniform survey depth is estimated in detail via Limiting Magnitude Maps; however, for convenience the median 10σ limiting magnitude for galaxies in SVA1 GOLD is approximately: g = 24.0, r = 23.8, i = 23.0, z = 22.3. The primary science data set can be broken into several fields (plotted below in Cartesian projection): 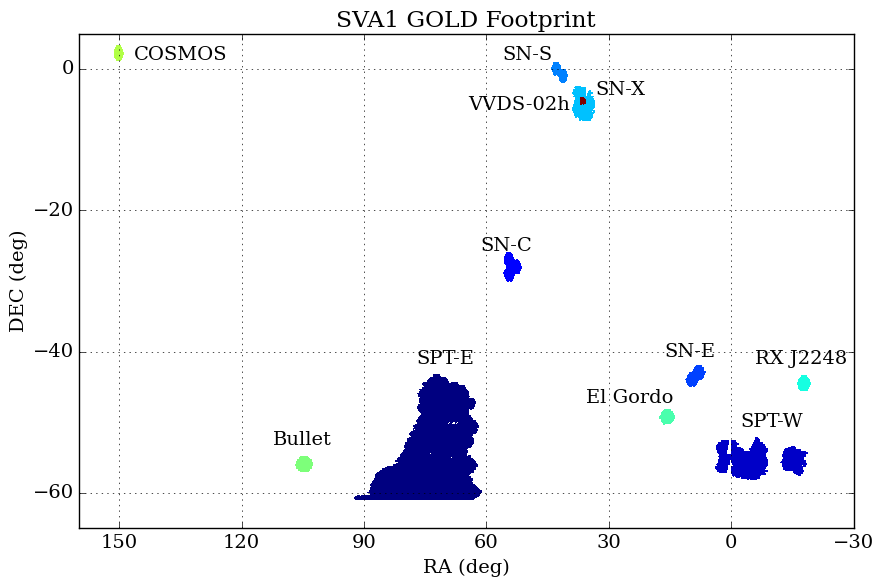 The SVA1 GOLD survey depth is estimated for the AUTO magnitudes appropriate for galaxies following the procedure of Rykoff et al. (2015).  Maps of the 10σ galaxy limiting magnitude were generated by fitting the MAGERR_AUTO vs MAG_AUTO relationship on large pixels and correlating with small-scale spatially varying survey characteristics (Leistedt et al. 2015). These maps are distributed in nested HEALPix format (nside=4096).

We also distribute a "good region" footprint which masks regions with imaging artifacts (as identified by a high density of objects with "crazy colors"), regions close to bright 2MASS stars, and regions where objects have large astrometric offsets between filters. A detailed description of the creation of the good region footprint can be found in Section 2.1 of Jarvis et al. (2015).

The DES Data Management system is supported by the National Science Foundation under Grant Number (1138766).